Objective: Earn favorable media coverage for the grand opening of a new master-planned community located in the northern suburbs of San Diego County.

– Press release writing and distribution on the news wire and by hand to local media outlets.

These releases captured details of Park Circle’s building progress, as well as their grand opening and unveiling of new amenities.

We eliminated media contacts that no longer aligned with our client’s goals and added new outlets to pitch to and work with. This allowed us to focus on pitching specifically to outlets that would more likely lead to coverage that would reach our target public.

We ensured our client and one of their homeowners felt prepared and confident before being interviewed by reporters. This also allowed us to go over messaging we wanted them to emphasize in interviews.

These quotes added substance and accessible material to the press releases we distributed.

– Media relations leading up to, during and after grand opening event

We maintained communication with journalists covering or attending the event to ensure they had access to interviews and correct event information.

We continued to ensure that press contacts had all necessary resources. After the grand opening event of new Park Circle amenities, we also collected data and created a recap of all the coverage that we had secured!

Park Circle opened its doors in spring of 2021, under unprecedented conditions resulting from the global pandemic. They continued to sell homes, even before hosting an official grand opening.

We calculated our audience reach across all outlets that featured coverage. By adding publication-wide audience figures for all platforms, we were able to able to generate an estimated (*drumroll please*) : 10.7 million total audience reach!

We generated an estimated 150,000 online views and 100,000 print views through our grand opening press, in less than one month’s time. 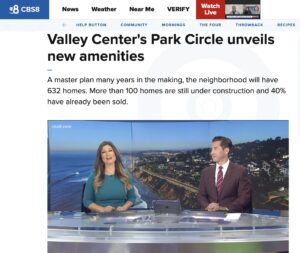 Some of our press highlights include:

– A two-page spread in the San Diego Business Journal, which has an ad equivalency of $13,000!