Today, the Lakers posted a photo of team executive Jim Buss on its official Facebook page. The smiling photo of Jim (wearing Celtic-green, by the way) was accompanied  by this caption: “Jim Buss chatting live with fans from Lakers HQ. Check it out here…”  I only skimmed the comments (examples above), but almost every response within the first 30 minutes has been negative.

My response… duh! Fans are royally pissed about trades and an inconsistent season right now. As a Laker fan and social media strategist, this Facebook post struck me as doubly odd. I’m really not sure what the Lakers expected from this post.

Social media lesson: Don’t rub salt in the wound. Instead of a smiling photo of Jim Buss “talking to fans,” a message from Jim explaining the reasoning behind recent trades, plus the successful acquisition of Ramon Sessions, etcetera, may have made for a better post. The only thing that made this post successful was allowing fans to vent. 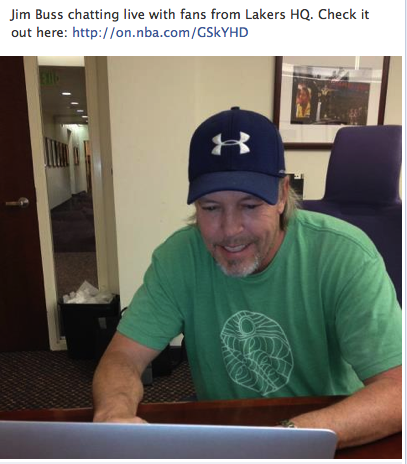